In many places we can see the map of the main chakras, with their corresponding colors: root chakra (red), navel chakra (orange), solar plexus chakra (yellow), heart chakra (green), throat chakra (blue), third eye chakra (violet), crown chakra (purple).
These colors correspond to the 3rd and 4th dimension of consciousness, but when we do an intense work with our chakras, and perform the quantum leap to more transcended dimensions, the colors of each chakra change.

Here is a graph about the 7th dimension rays that correspond to each chakra transcended to this dimension of consciousness: 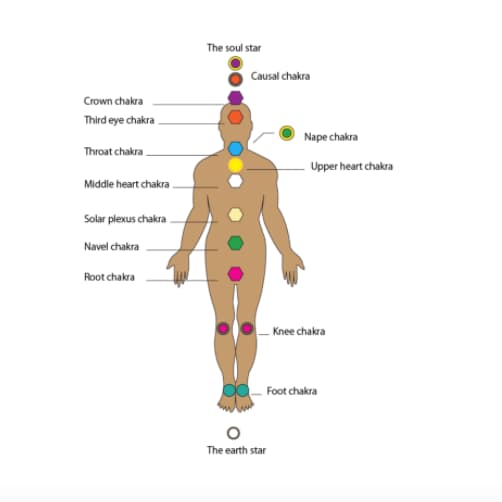 The origin of the chakra system dates back to the period between 1500 BC and 500 BC. More specifically this knowledge is recorded in the Veda system (a form of spiritual literature written in the Sanskrit language).

With the diffusion of the chakras came the way to focus on them, the ability to work on the chakras was achieved by practicing an ancient form of physical activity called Yoga.
According to the principles of yoga, there are certain parts of the body that cannot be touched, called the subtle parts of the body. Through these parts, energy flows to different areas of the human body.

It is known that there are seven main points in the subtle body connected to the seven main glands of the human body and these are considered the energy vortices or chakras.

Working with the chakras does not give immediate results. Often times, you may have to deal with past blocks and a buildup of negative energy.
Your body is a temple. Like entering a sacred temple, you will make sure to follow the rituals present in the place. You would never think of taking a shortcut, because every action is important and every word you speak is vital to the entire process of entering the sacred temple.

When you exercise patience, you let the energies of the world realize that you are going to work with them to improve your inner being. You are letting those energies know that your mind, soul and body are open to receive the power of the chakras and the energy of the universe.
Don’t worry about the time it takes to master the chakra activation techniques. Just focus on the technique itself.